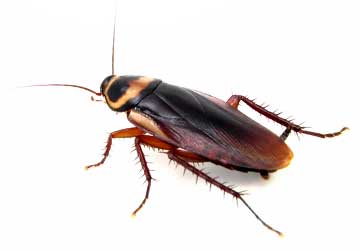 Cockroaches are arguably the most commonly encountered insects we see.  They can be found anywhere from restaurants, to homes or offices!  They are large in size an commonly transmit disease.  Recent studies have found that cockroaches are the second largest cause of allergies in humans (dust being the first largest cause). There are numerous breeds and species of roaches in the world, but the most common household cockroach is the German cockroach.  Cockroaches typically come into our homes by laundry, grocery bags, or wander in from outdoors. Once cockroaches enter a home or business, they can produce up to several thousand  cockroach offspring in the span of a year. 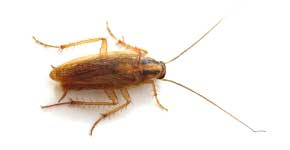 German Cockroaches (Blattella germanica) are by far the most common cockroach encountered by people in the Northeast region of the United States. Adult German cockroaches are approximately 1/2 to 5/8 inches long and are light brown to brown in color. Their most distinguishing characteristic is the prominent dark brown racing stripes seen on their upper thorax.  Their egg cases typically contains 30 to 40 eggs. The egg case is a tiny, brown, purse-shaped capsule that is carried by the female until just before hatching. Nymphs will often hatch from the ootheca while the female is still carrying it. Nymphs are similar in appearance to the adults except that they are smaller and lack wings. 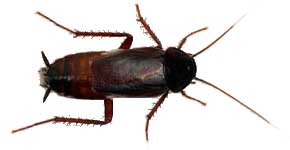 The Oriental cockroach, (Blatta orientalis) is also referred to as a “water bug” because of its tendency to harbor in damp locations such as sewers and drains. Oriental cockroaches are approximately 1 inch long and vary in color from dark brown to black. Males have wings covering 3/4 of their body, and the females have very short wings. Both the male and female cockroaches are flightless.
A female oriental cockroach produces an average of eight egg capsules in her lifetime with each capsule containing about 16 eggs. The incubation period for the oriental cockroach is about 40 to 80 days depending upon temperature, and fully mature in approximately one year.

The American Cockroach, (Periplaneta americana), is also known as the water bug. This is a large cockroach with the body ranging in length from approximately 1 to 1-1/2 inches long.  The antennae extending from the cockroaches head are just as long in length as its body. The adult is brown to dark brown and has a yellow area on the pronotum (this is the region that is directly behind its head).

Matured / Adult American cockroaches grow wings but are not the greatest of fliers. Male cockroaches have grow an extra set of appendages on their abdomens called styli.  This is one of the best ways to distinguish the males from the females.  Immature American cockroach nymphs resemble adults, however they are smaller in size and do not have wings. Their egg sacks are dark brown and are typically 1/3 inch long. The egg sacks / capsules have been compared to small or ridged purses in appearance.  They are deposited in favorable environments and are not carried by the female till maturation. Immature cockroaches emerge from egg cases in 6 to 8 weeks and require 6 to 12 months to mature. Adult cockroaches can live up to one year, and produce an average of 150 offspring.

How Can We Help?

Whats Bugging You offers comprehensive plans to eliminate cockroaches from your home or business.
If you suspect that you might have cockroaches or are at risk for cockroaches, contact us today!